UPDATES:
2016 Archive:
OCTOBER 2016: CTIBIOTECH are invited to be present at the BIOJAPAN expo (www.ics-expo.jp/biojapan/) and Regenerative Medicine Japan 2016 conference (http://saiseiexpo.jp/), in Yokohama, Japan, 12 to 14 October 2016.
CTIBIOTECH will be available to talk with partners and clients and will announce our new 3D bioprinting capabilities for functionalised skin, micro-organ technologies and cancer models. Staff from CTIBIOTECH will be onsite to present our latest developments in Cancer, Skin and Tissue Engineering technologies.
CTIBIOTECH will also be present in OSAKA at the European Biotech and Pharma Partnering conference on 11th October 2016. (https://www.b2match.eu/euj-bio-pharma-be-2016 ).
APRIL 2016: NEW STRATEGIC PARTNERSHIP ANNOUNCED between CTIBIOTECH, NIKKOL Group and Nikoderm Research, Japan.
The strong partnership is a strategic alliance between Japan and France in the field of Dermatocosmetics development and testing. It was announced by His Excellency Yoichi Suzuki, Japanese Ambassador to France and Senator Maire Gerard Collomb, President of the Lyon Metropole.

Testing of cosmetics and dermatological drugs and compounds before human use is extremely important and part of the modern development of useful and active products.  To have better “humanised” products without animal testing the Japanese Nikkol and Nikoderm group reached out to the innovative CTIBIOTECH company who specialise in creating 3-dimensional human tissues in the laboratory. Together CTIBIOTECH and NIKKOL/Nikoderm are creating modern skin-related testing using human cells and artificial skin models.

To read the press release in English click here

To read the press release in French click here

The partnership was further solidified by a second official signing ceremony in the presence of Senator Maire Michel  FORISSIER, Mayor of Meyzieu and Philippe MEUNIER, député du rhône.  Mayor FORISSIER welcomed the expansion of the Japanese companies to the region of Meyzieu and Député MEUNIER commented on the strong importance of links between France and Japan.

To see more photos from the launch of the partnership click on the photo below:

2015 Archive:
November 2015 – CTIBIOTECH given the Best Scientific Innovation Award, at the Victoires de l’Innovation Awards 2015
At the awards, sponsored by the national newspaper ‘Le Progres’, global pharmaceutical company Sanofi and global energy company EDF, CTIBIOTECH laboratories in Lyon, France were announced as the best innovators in the category of ‘Science’. 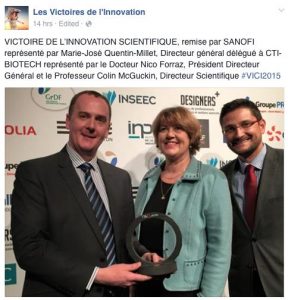 Video coverage of the award appears below:

More photos from the event can be seen below (click on image to enlarge):

The inauguration of the new CTIBIOTECH building took place Thursday 17th September 2015. The inauguration was led by Philippe MEUNIER, député du rhône, Michel FORISSIER, Senateur-Maire, Meyzieu-Lyon and Françoise GROSSETÊTE, member of the European Parliament. Respresentatives from ONLYLYON, ADERLY, LYONBIOPOLE, major pharmaceutical industries, SME companies, hospitals, universities and dignatories were present.
The PRESS RELEASE from the event can be found here: 150917-Communique-CTI-Biotech-inauguration
To see coverage of the laboratories by France 3 Television:
https://www.youtube.com/watch?v=270x20S-3Ts
Coverage of the event in the news includes:
La Tribune newspaper: 150918-acteursdeleconomie.latribune.fr
Orange Business News: 150918-Orange.fr
Some photos from the inauguration appear below: 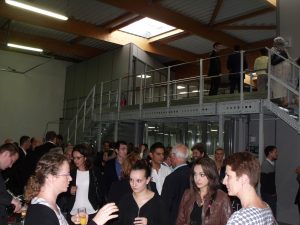 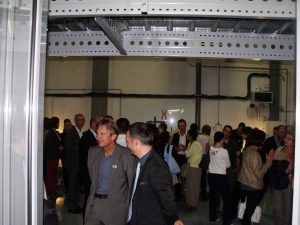 To see more photos of the inauguration click here

CTIBIOTECH organised and hosted the first bilateral maxillofacial, bone and cartilage research meeting between France and Switzerland, with experts in the field here to talk about their latest research and the potential of adult stem cells, placental tissues, amniotic membrane and combination with surgical techniques to advance therapies. Surgeons, clinicians and scientists discussed the potential to advance this work in the future. 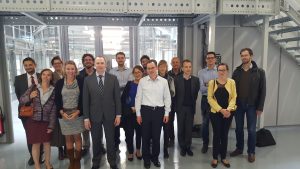 March 2015
Professor McGuckin invited to a meeting in Rome.

2013 Archive:
September 2013
Professor McGuckin and Dr Forraz invited to the ONLYLYON Red and Black party to celebrate business in Lyon. 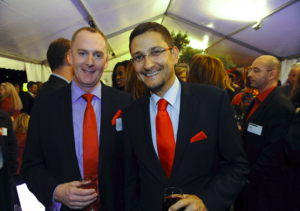 March 2013
Launch of the IMODI initiative by President Francois Hollande, President of France.

Press releases of the event can be found at www.imodi-cancer.org
2012 Archive:
Professor McGuckin and Dr Forraz attending the Mayor of Meyzieu-Lyon annual Near Year Reception.

March 2011
Visit of EU politicians to CTI.
A delegation of members of the European Parliament visited laboratories with Dr Forraz and Professor McGuckin to understand more about Regenerative Medicine research in Europe.

February, 2010
Professor McGuckin invited to a meeting in Rome.